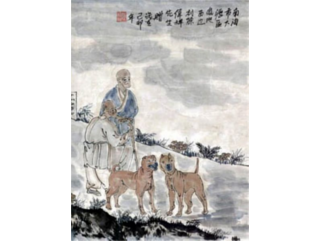 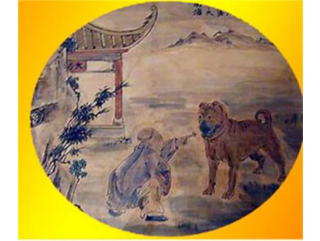 We don’t know much about the history and the creating of the chinese shar-pei , since the China wasn’t the most canine-loving cuntry and so, less gravity is given to the creations and development of the dog breeds. And because of the low education of the people then, which the most of them where farmers. The dogs buck then, lived to serve the chinese people and nothing else. The shar-pei was one of them. But because it was a multi-purpuse dog lived in China for so many years.
Is believed that the shar-pei exists from the period of the Han’s dynasty, 202 b.C. – 220 a.C. . Its place of origin is China and particular the village of Dailick near to Canton, in the south China coast, where it took its name, which in Chinese means coat from sand, not because of the color but because of the texture.

The breed of shar-pei never had a standard , like all the breeds in China, despite an adage, like a poem which ’’photographs’’ how the shar-pei should look like.

In 1949 when the communism took place in China and at the period of the Mao Che Tung’s dynasty, the dogs where supposed to be luxury items , only for the high class,and nobody else could have them. So the massive extermination began.

Only few numbers of shar-pei survived. These that lived in faraway areas and could not be detected , and were used by the farmers, and those that left and went in the forest and survived by hunting their own food. After all it is well known that shar-pei are survivors.

The people were starving and nothing was left for the animals. The lack of food made the dogs , generation by generation to loose their original size and were getting smaller to decrease their needs for food.

And while the breed was getting to extinction, during the early ’50, the border control between China and Hong Kong was not as tight as they thought and shar-pei started to entered in Hong Kong as fighting dogs once again . We have to say that the dogfights were almost the one and only way for entertainment by the lower class of Chinese people and also a good way to get some money for their leaving.

In the 1970 starts the deformation of the Chinese shar-pei . Some irresponsible breeders decided to cross breed it ,with the bulldog, the boxer, the bull mastiff and bull terrier in order to improve its size and skills in the fighting rings, because of the biggest opponents that where coming.

And some others with more marketing thoughts, started to produce more and more wrinkled puppies with more muzzle , in order to shell them for a lot of money, to the Western that got mud for having the new rarest dog that got almost to extinct .

The way that America then spread the news about shar-pei and the way that advertise the new puppies was over too much and of course many got a fortune because of breeding and shelling them in order to satisfy us many as possible of the new owners, that wanted a very wrinkled dog with a lot of fold skin. This was the time when the Chinese shar-pei lost its form and a new one took place , with hippopotamus muzzle , meat mouth, a lot of wrinkles in its body and head and little eyes that where lost in them, softer and longer coat, sluggish temperament and with no way of use at all. It was just the rarest dog in the world and could find it only in rich families.

In the 1994 Chinese , maybe because they understood their fault and that they where loosing their breed, in order to keep its origin and traditional form, made the standard of the breed in the way a shar-pei should be, and gave it to the F.C.I as the No 309/1994 standard of Chinese shar-pei. But things didn’t went well and F.C.I denied it. Maybe because it was now too late to get buck, the new shar-pei it was far more expectable and desirable to the western than the traditional one.

So, in America, in 1999 a new standard is written down in staid ,and had many differences from the original . It was the No 309/1999 standard of Chinese shar-pei ,but nothing was Chinese in it.

Fortunately the time when the shar-pei was just a luxury item and fashion symbol have past. Now we have some good breeders that work for the health and type of the breed without over type dogs , but unfortunately no one is giving attention to the working abilities of it.

We mast not forget that everything started from the ancient ancestor of the modern shar-pei. And this ancestor is alive, it exist and serve until now the Chinese people and its their tool in hunting and guarding.

We can only hope that soon these two types will be recognized separately in the show rings.

Hope that everyone will except it and no longer deny its existence. 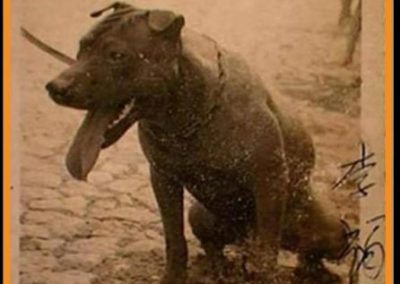 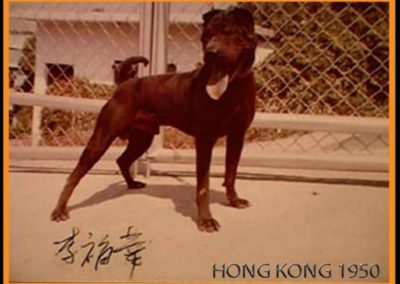 (photos from the site : sharpeiclubhk) 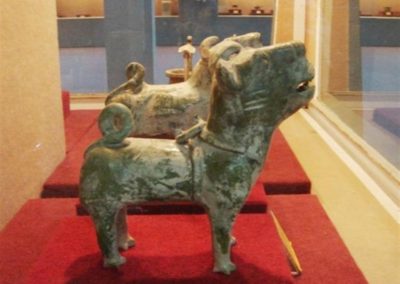 Photos taken personally by T.Eric Omura from the Panyu museum. These pictures shows the existence of the shar-pei from the Han Dynasty, over two thousand years ago. The location where the statues were is actually very close to the Dali and this confirm the place of origin for the shar-pei. And as we know from the latest DNA test analyze in Sweden and America, for the breed, the shar-pei is confirmed to be among the first dogs evolved from the wolf.