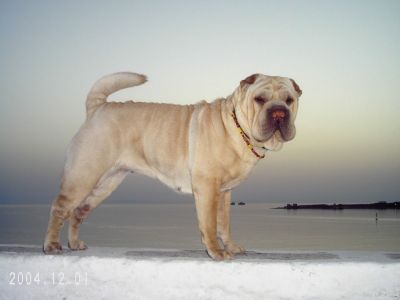 BRIEF HISTORICAL SUMMARY
This Chinese breed has existed for hundreds of years in the provinces bordering the South China Sea. The town of Dialak in the province of Kwun Tung is probably the place of origin.

HEAD
Rather large in proportion to body. Wrinkles on forehead and cheeks continuing to form dewlap.

Muzzle : A distinctive feature of the breed. Broad from root to tip of nose with no suggestion of tapering. Lips and top of muzzle well padded. Bulge at the base of the nose permissible.

Jaws/Teeth : Jaws strong with a perfect scissor bite, i.e. the upper teeth closely overlapping the lower teeth and set square to the jaws. Padding of lower lip should not be so excessive as to interfere with the bite.

Eyes : Dark, almond-shaped with a scowling expression. Lighter colour permissible in dilute-coloured dogs. Function of eyeball or lid in no way disturbed by surrounding skin, folds or hair. Any sign of irritation of eyeball, conjunctiva or eyelids highly undesirable. Free from entropion.

NECK
Medium length, strong, set well on shoulders. The loose skin under the neck should not be excessive.

BODY
Folds of skin on body in mature dogs highly undesirable except on withers and base of tail, which show moderate wrinkling.

Topline : Dips slightly behind withers; then it rises slightly over loin.

Underline : Rises slightly under the loin.

TAIL
Thick and round at the root, tapering to a fine point. The tail is set very high, a characteristic feature of the breed. May be carried high and curved, carried in tight curl or curved over or to either side of the back. Lack of or incomplete tail highly undesirable.

HINDQUARTERS : Muscular, strong, moderately angulated, perpendicular to the ground and parallel to each other when viewed from the rear. Wrinkles on upper thighs, lower thighs, rear pasterns as well as the thickening of the skin on hocks undesirable.

GAIT / MOVEMENT
The preferred gait is trot. The gait is free, balanced, active with good forward reach and strong drive from the hindquarters. The feet tend to converge to a center line when the speed increases. Stilted gait undesirable.

HAIR : A distinctive feature of the breed : short, harsh and bristly. The coat is straight and offstanding on the body, but generally flatter on the limbs. No undercoat. The coat may vary in length from 1 cm to 2,5 cm. Never trimmed.

COLOUR : All solid colours acceptable except white. Tail and rear part of thighs frequently of a lighter colour. Darker shading down the back and on the ears permissible.

FAULTS
Any departure from the foregoing points should be considered a fault and the seriousness with which the fault should be regarded should be in exact proportion to its degree and its effect upon the health and welfare of the dog.

Any dog clearly showing physical or behavioural abnormalities shall be disqualified.

REMARK
Any artificial physical alteration to the Shar Pei (in particular lips and eyelids) eliminates the dog from competition.